Logistic regression can be used in the following scenarios:

Notice that just like multiple linear regression, we can utilize many explanatory variables. It is the nature of the response variable which will inform you of what type of regression is appropriate.

Before we discuss the mechanics of logistic regression, let’s begin by some of the terminology we will be seeing through the example below.

Does taking Vitamin C help prevent colds? Researchers want to study the relationship between daily ingestion of Vitamin C tablets and whether the person developed at least one cold over the winter season. Approximately half of the participants were randomly assigned to the Vitamin C group and the remaining participants were assigned to the Placebo group. The response variable is whether or not a cold developed. The results are summarized below:

We are interested in whether Vitamin C helps people avoid colds. There are a few quantities that can help us here.

In general, we have the following formulae:

The odds of an event: P(Event happens)/P(Event does not happen)

Suppose we take a random sample of candidates running for office at the local level. We want to know if there is a relationship between candidate success and the amount of money (in thousands of dollars) they were able to raise.

The logistic regression model relates the probability a candidate wins the election (pi) to the predictor campaign contributions (X), through a framework that is similar to that of multiple linear regression:

While the model above is less intuitive than the model we use for multiple linear regression, there are many similarities you will notice once we use software to get our estimates for the regression coefficients (in this case B0 and B1).

Let’s suppose that using the appropriate syntax we obtain the following computer output:

What this model is generally telling us is that campagin contributions is significantly (and positively) associated with the likelihood of a candidate being elected (B1=0.02787, p-value=0.0231).

Let us examine how we could write out the regression equation:

We can use this model for predictions as well. Suppose that we have a candidate who was able to raise 100 thousand dollars. What is the probability that they will win their local election? 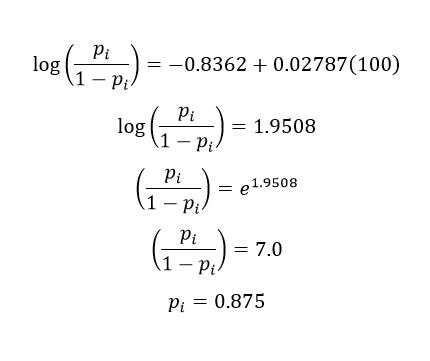 There are a few quantities here that are informative. First, the odds of this candidate winning the election is 7.0. That is, they are 7 times more likely to win then they are not to win. Secondly, we may just want to state that the probability of winning is 0.875. The point of showing you this algebraically is just so you know that we can use this equation to make probability predictions of an event happening.

Please refer to the video from the previous class that involves details about the coding that corresponds to this content.

There are some additional interpretations of logistic regression models available here. It may be helpful to review if you have a categorical explanatory variable that is more than 2 levels in your project.

After reviewing the material above, take Quiz 12 in moodle. Please note that you have 2 attempts for this quiz and the higher grade prevails.This is your last quiz for the course!

Review the slides here. Then work on Mini-Assignment 10 on Logistic Regression and Project Component J.